Synaptic connections are a fundamental building block of neuronal function, enabling the propagation of activity from one neuronal circuit to another. However, traditional in vitro neuronal models comprise a single neuronal circuit, whereas animal models are too costly and complicated to facilitate an assay on synaptic propagation. Here, we describe the development and characterization of a simple in vitro assay of synaptic propagation between two distinct neural circuits. A two-compartment insert was used to seed spatially distinct populations of rodent cortical neurons in each well of a 6-well MEA plate. After the insert was removed and the cultures matured, functional synaptic connections formed between the two populations, allowing bursts of coordinated activity between the two populations. One population was transduced with ChR2, a depolarizing optogenetic channel, and stimulated with blue light to evoke activity, while the other population served as the “readout” to quantify synaptic propagation. The wells were dosed with a cocktail of synaptic blockers, highlighting the ability of the assay to resolve changes in synaptic propagation.

The two-compartment insert was removed from the packaging and placed on the MEA surface in the each well of the CytoView MEA 6- well plate, such that the center line was over the middle of the microelectrode array. Each compartment of the insert was filled with 50 µL of PDL solution (0.01%), then rinsed four times with diH2O and dried.

RNCs were thawed and cultured according to the supplier recommendations. Cell density and viability was determined using a hemocytometer. The cell suspension was transferred to a 15 mL conical tube and centrifuged at 100xg for 1 minute. The supernatant was aspirated, being careful to not disturb the cell pellet. Neurons were resuspended at a concentration of 10,000,000 neurons/ml and the suspension was divided into two tubes for the transduction step. A 5 µl droplet of the RCN suspension was placed over the recording electrode area on each side of the insert in each well of the MEA and incubated for one hour at 37°C, 5% CO2 then 100 µL medium was added to each compartment. The insert was removed after 48 hours, the well filled to 500 µL of media, and then maintained by exchanging 50% of the medium every 2-3 days.

Neurons on one side of insert were transduced to induce expression of Channelrhodopsin (ChR2), a blue light-sensitive opsin, via an AAV-9 viral vector and CAG promoter (rAAV9/CAG-ChR2-GFP, 4.1x10^13 viral molecules/mL). The viral vector (3 µL of virus stock) was added to one of the cell suspension tubes prior to plating.

Optical simulation was applied with the LUMOS 96 optical stimulation device and operated by AxIS Navigator Stimulation Studio. The Lumos applied blue light pulses at 2% of maximum power at a frequency of 0.5 Hz for two minutes.

Silicone inserts with two compartments were added to each well of a CytoView MEA 6-well plate. Cortical neurons were seeded into each of the compartments and cultured for two days. At two days in vitro, the insert was removed, such that axonal projections could cross the cell-free gap and establish functional connections between the two distinct cortical networks. 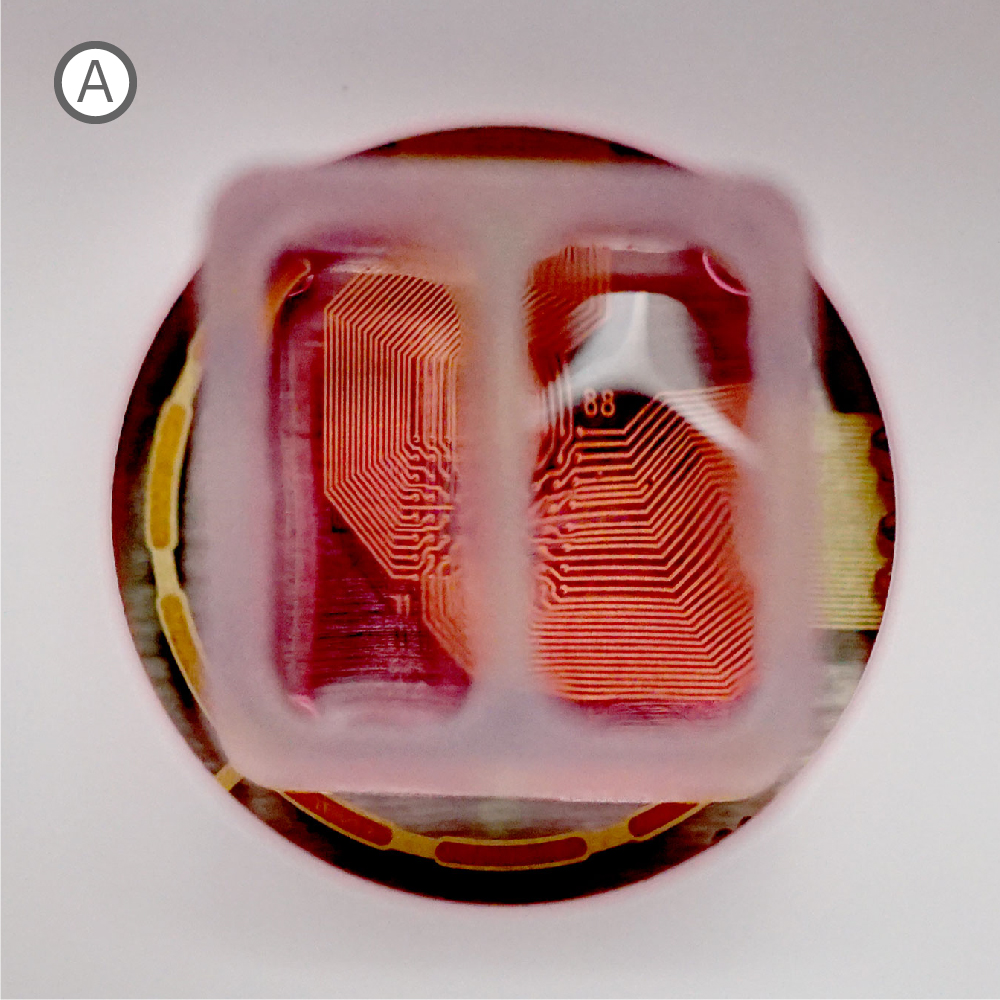 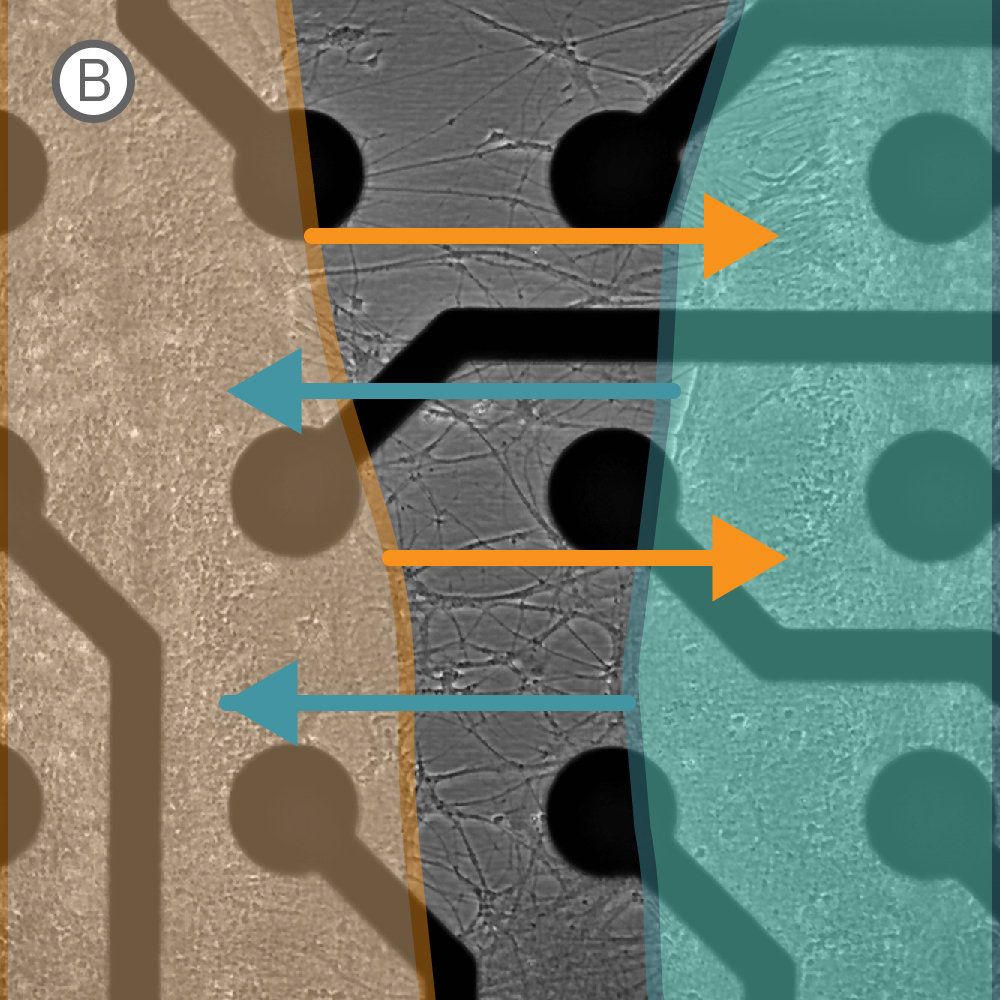 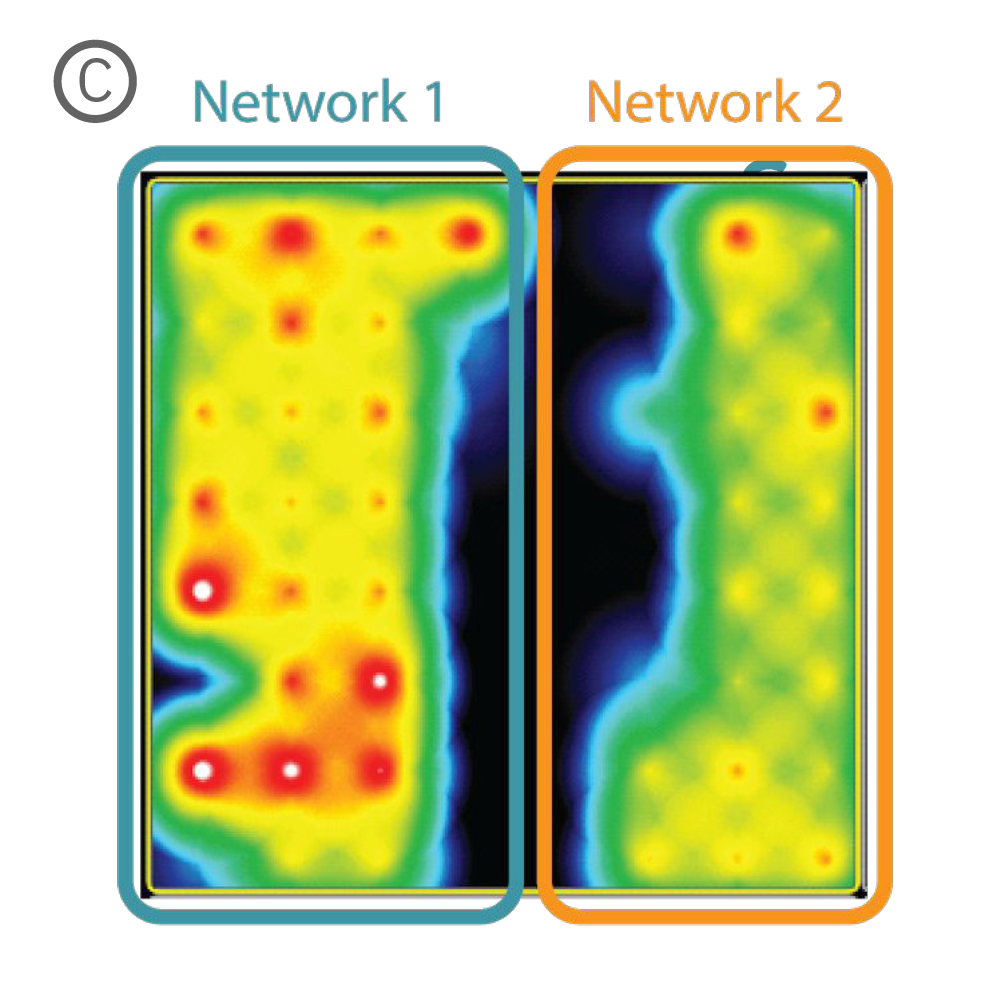 An illustrative example from a single well on the plate is shown in Figure 1. The insert divides the well into two compartments over the array, as shown in Figure 1A. An optical image of the well confirms that axonal projections have crossed the gap within 10 days of removing the insert (Fig. 1B), and the activity map indicates synchronous activity between the two networks (Fig. 1C).

The initial spatial separation of the neural networks allowed genetic modification of each network independently. By ~17 days in culture, the transduced population was responsive to light stimulation, and the functional synaptic connections propagated the evoked activity to the other network. An example of the data collected from the evoked assay is provided in Figure 2 below.

The cartoon in Figure 2A depicts the two spatially distinct networks: the optically “evoked” network (orange) and the “readout” network (teal). Each pulse of light (black triangles) elicited a burst of activity in the well across the two networks (Figure 2B). The peri-stimulus raster in Figure 2C shows that the activity begins in the “evoked” network, and then propagates, after a delay, to the “readout” network. Thus, the well divider and optogenetic simulation provide an assay platform for investigating pharmacological mediation of synaptic transmission between two cortical networks. 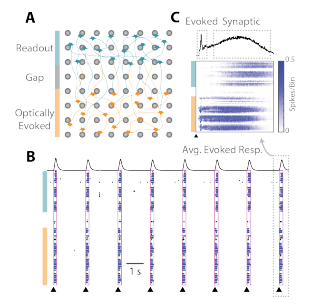 Figure 2: Connection between two cortical networks formed after the well divider was removed. (A) The “evoked” network is sensitive to optical stimulation, whereas activity in the “readout” network is dependent on synaptic propagation. (B) Raster plots indicate synchronous activity after optically stimulation and (C) the average evoked response denotes an initial evoked response followed by a flurry of synaptically mediated activity.

The RCN cultures contain both of excitatory and inhibitory neurons, therefore a combination of NMDA, GABA, and AMPA receptor antagonists were used in combination. APV (50 µM), Bicuculline (20 µM), and CNQX (20 µM) were delivered to the wells together as a cocktail. The evoked assay was performed, as described in Figure 2, in baseline, dosed, and washout conditions, under vehicle and cocktail treatments. The raster plots from an example well qualitatively show that the addition of the cocktail prevented the evoked input from propagating to the “readout” network, but propagation was then restored following washout (Figure 3). 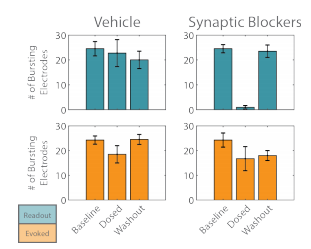 Figure 4. The number of bursting electrodes was used to track the entrainment of each network, “evoked” (orange) and “readout” (teal), to the optogenetic stimulus.

The above analysis was performed according to the spatial separation of the two networks within the well. Similar results are obtained when the latency of the evoked response is considered. Here, the activity from the two networks were analyzed together, but segmented into an early response (0-40 ms) directly evoked by the optogenetic stimulus and a late response (40-100 ms) mediated by synaptic propagation. 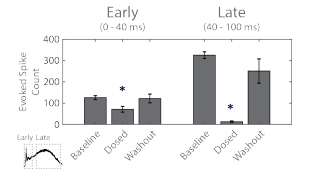 The evoked spike count was used to quantify the response for each segment of the response. The early response, with directly evoked activity, did decrease after adding the cocktail, indicating the presence of short latency synaptic activity (Figure 5). The peristimulus raster plot from Figure 2C indicates that much of this short latency synaptic activity was within the “evoked” network. The late response, representing synaptic propagation, was significantly reduced after administering the cocktail of synaptic blockers. Notably, the near complete erasure of activity in the late synaptic response indicates blockade of intra- and inter-network synapses.

The Maestro MEA coupled with the ibidi two-compartment insert provide versatile assay platform for interrogating the connection between two neural networks in vitro. The cell types seeded on the MEA, timing of divider removal, and the configuration of the analysis offer flexibility to address a variety of research questions. 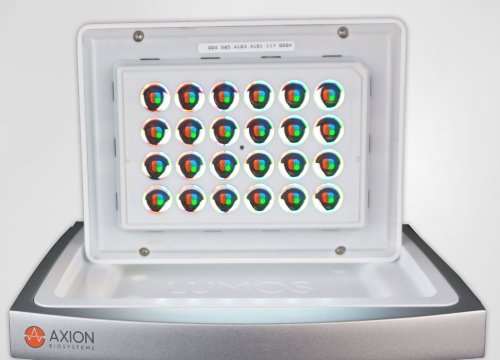